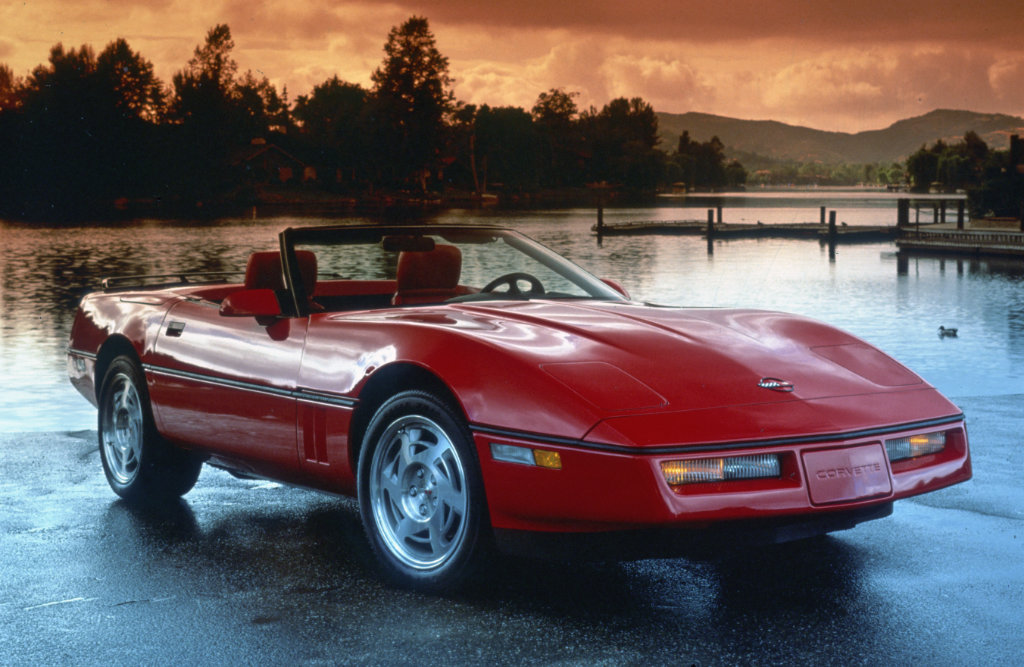 The technical term for this photo is "3/4 Front View". It's a popular car photo as it shows both the side and the front of the car. It's also quite common to the point of being a cliche.

Since nobody wants to be known as a cliche photographer, the solution is to do something different.

Although I'm not a fan of this photographic POV, if I was selling the car it is the shot I would use as the lead photo. I guess maybe my standards aren't that high. 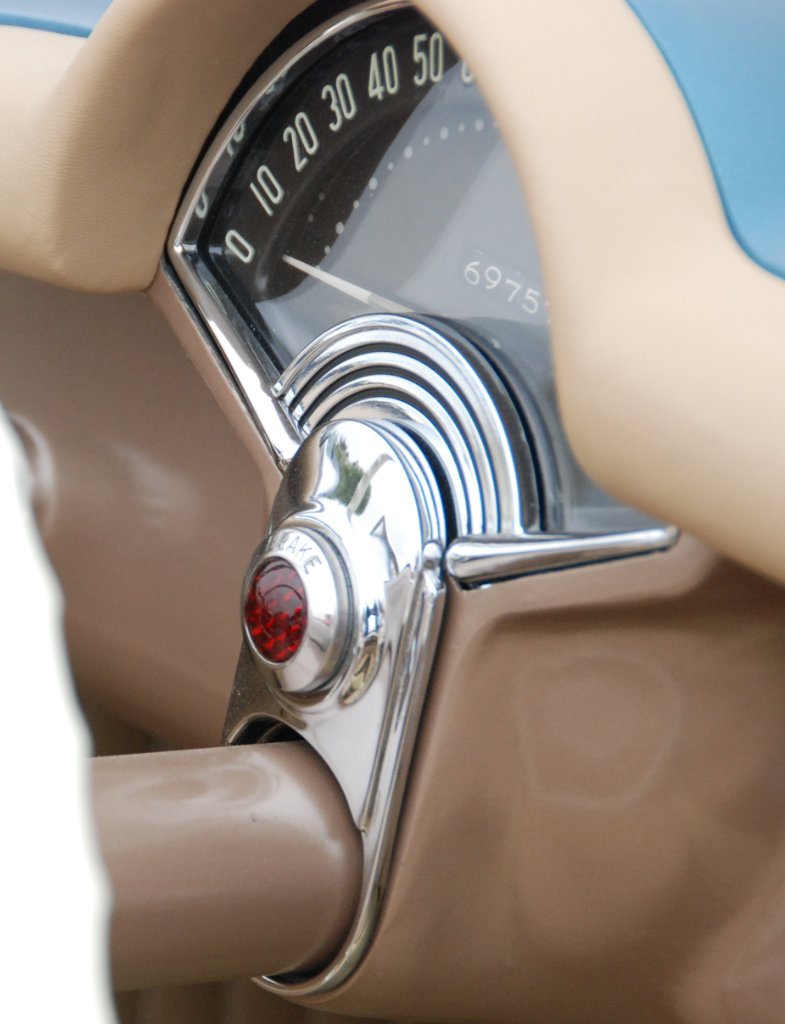 Speedometer on a 1954 Pennant Blue with beige interior Corvette. You can often get a better perspective of interior details by angling to the side.

The secret here is to be adventurous. Some may disagree but I've often said that the best thing to happen to photography is the invention of the digital camera. The fact that we don't have to pay for film and processing allows us to experiment. Feel free to try different angles and approaches. This will result in a lot of bad photographs but who cares, just don't show them to anybody. 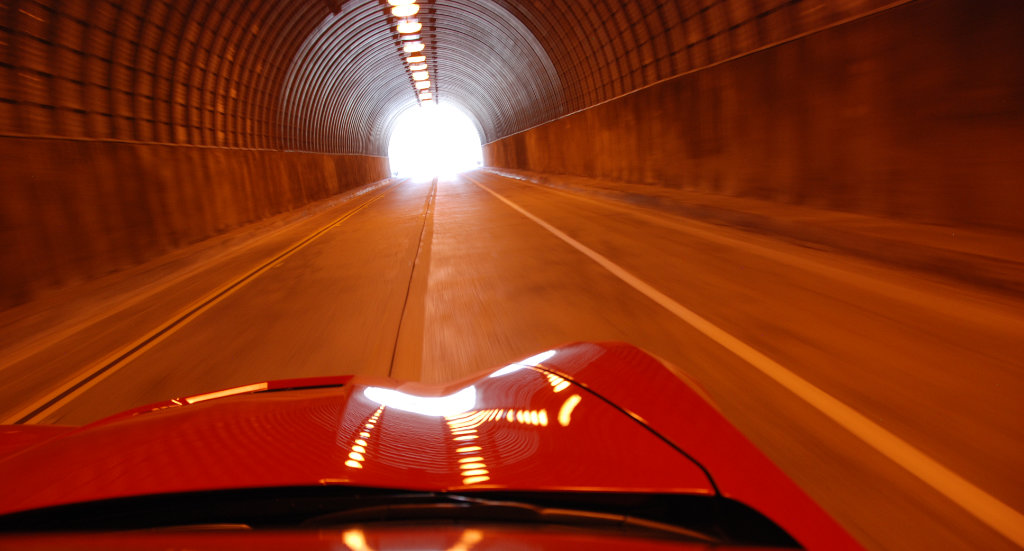 I like this image of driving through a tunnel, although it's more of a fine art photograph without much Corvette content. It is however different. 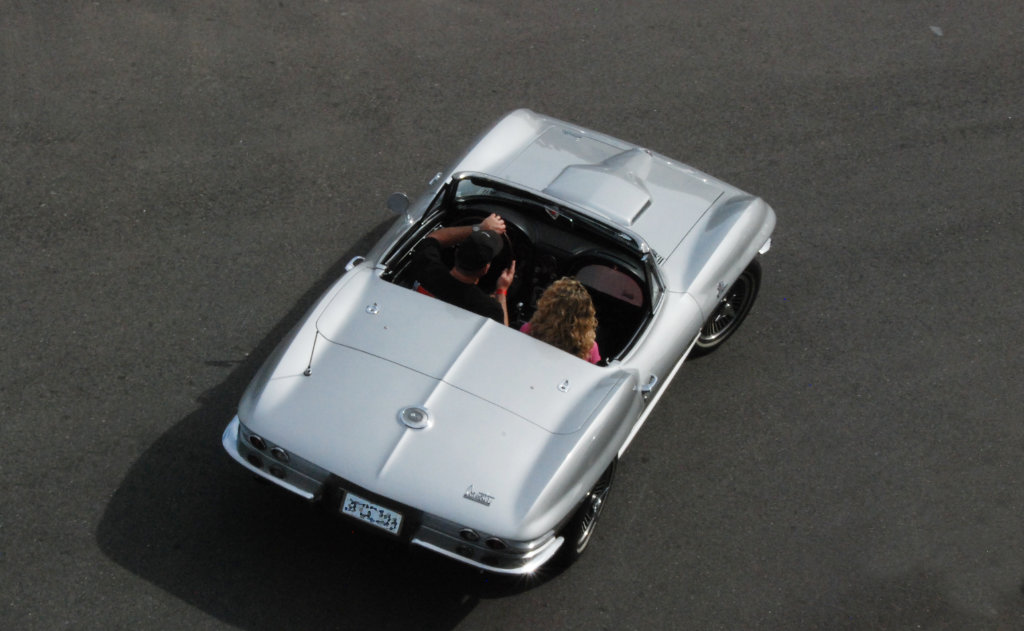 I attended a Corvette gathering at the Petersen Museum and got these shots by hanging out above the parking lot exit. It was like taking candy from a baby*.

*Have you ever tried doing that? It's not easy. 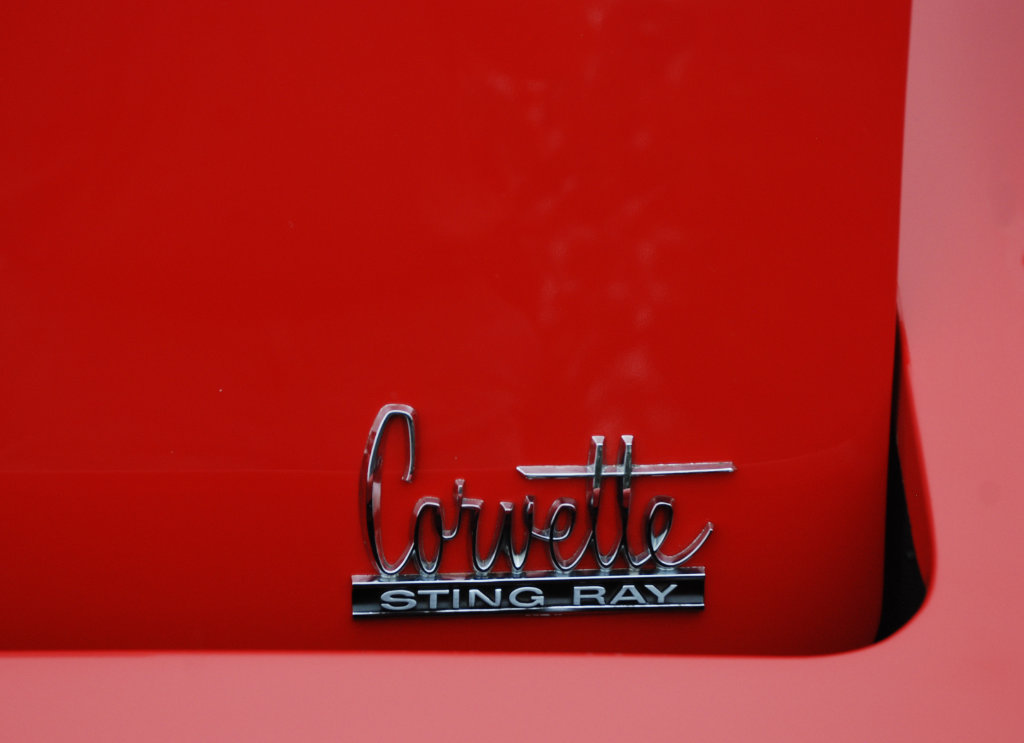 The emblem on the left front of the hood (exclusive to 1966) makes is quite photogenic. But I like it best with the hood open, giving it some depth.

Most Corvette enthusiasts would rather be the driver than the passenger in a Corvette. But the driver can't (shouldn't) take photographs, such as this one showing the curvy road ahead. Just stick your camera above the windshield of a Corvette convertible with the top down and click away. 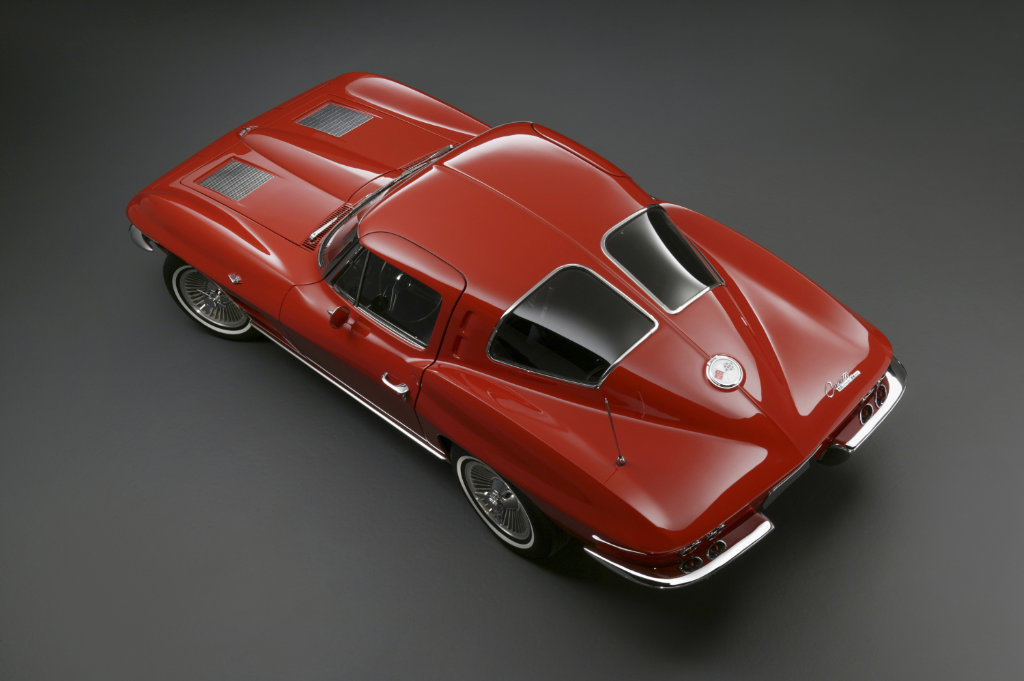 Amongst the best looking cars ever created, the 1963 Split Window Coupe Corvette is the most appealing. It may also be the most photographed.

The above GM sourced photograph is a good but common image. 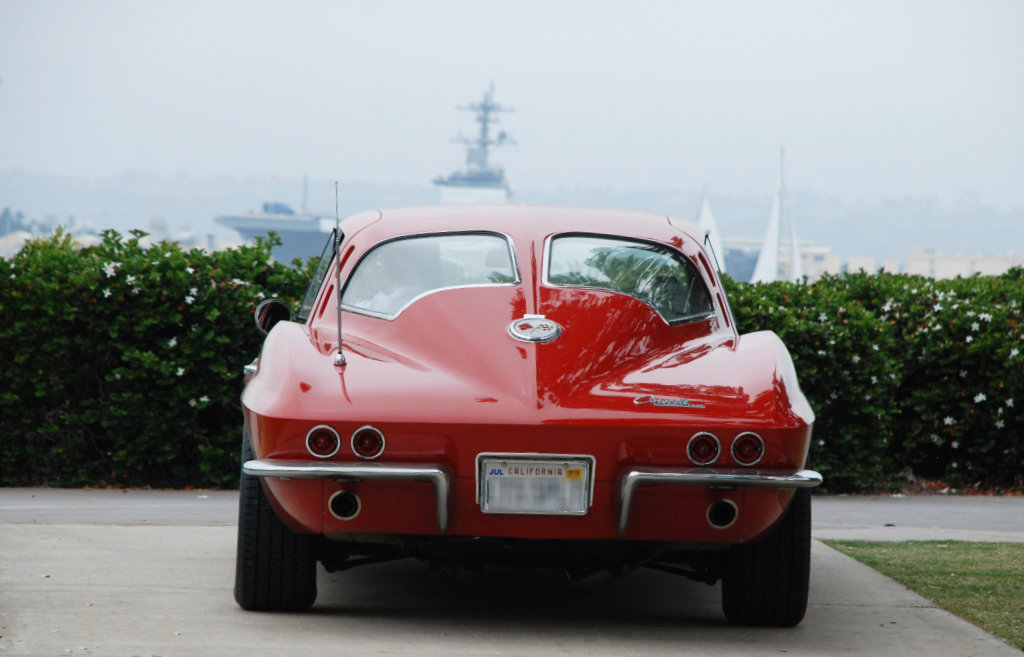 Above: I used a zoom lens to give this iconic split window some compression. Focal length is 135 mm or ~5.4x closer.

Below: Try getting creative with the angle you are presenting to your viewers. Go ahead with the usual 3/4 rear view as those photographs do have a place in the world. But also be different, you'll be glad you did. 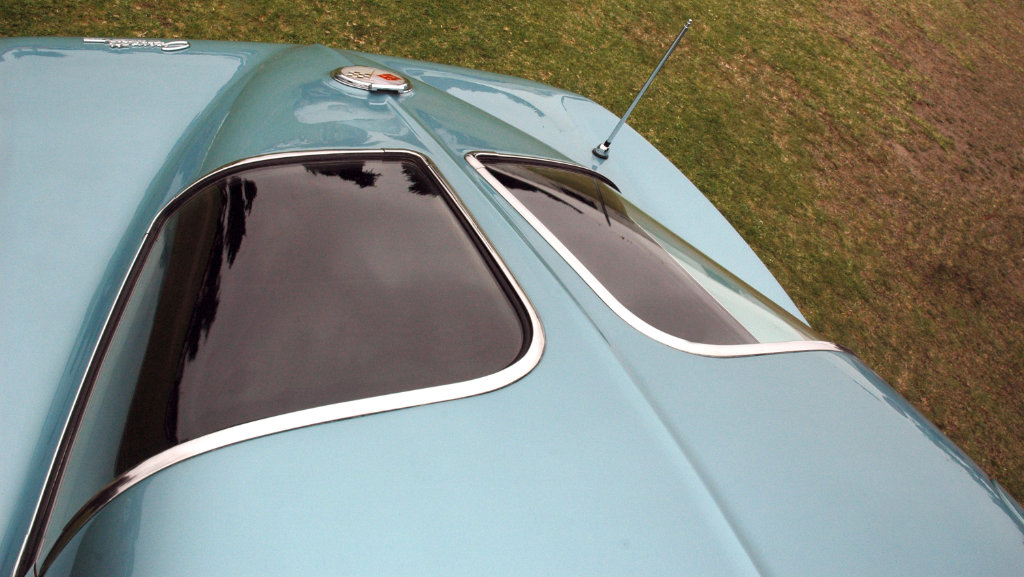 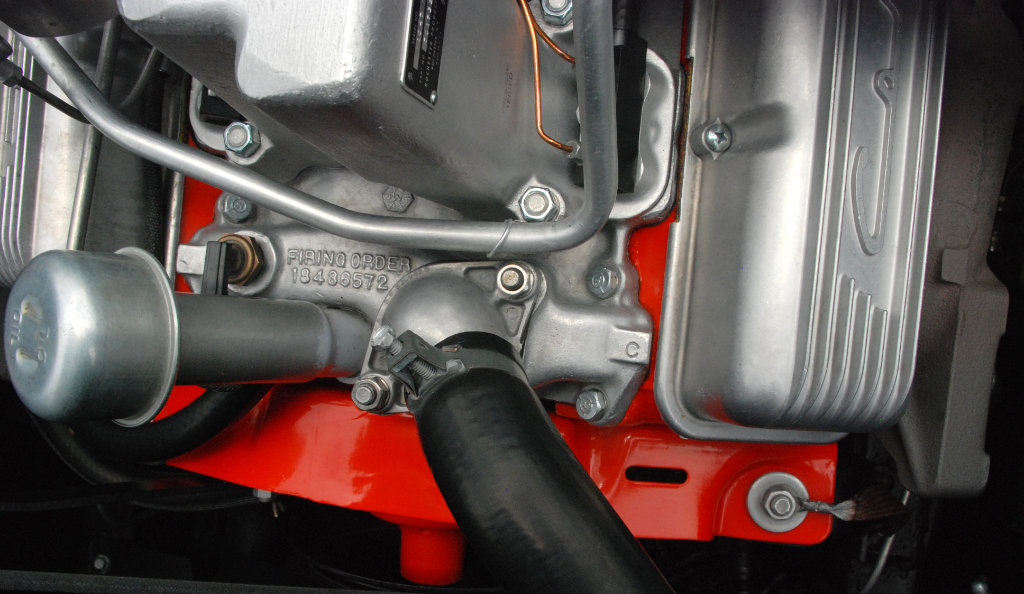 Engine photographs can be rewarding. What makes this 1957 fuel injected engine bay image, other than its superb cleanliness, is the raised "FIRING ORDER" label. 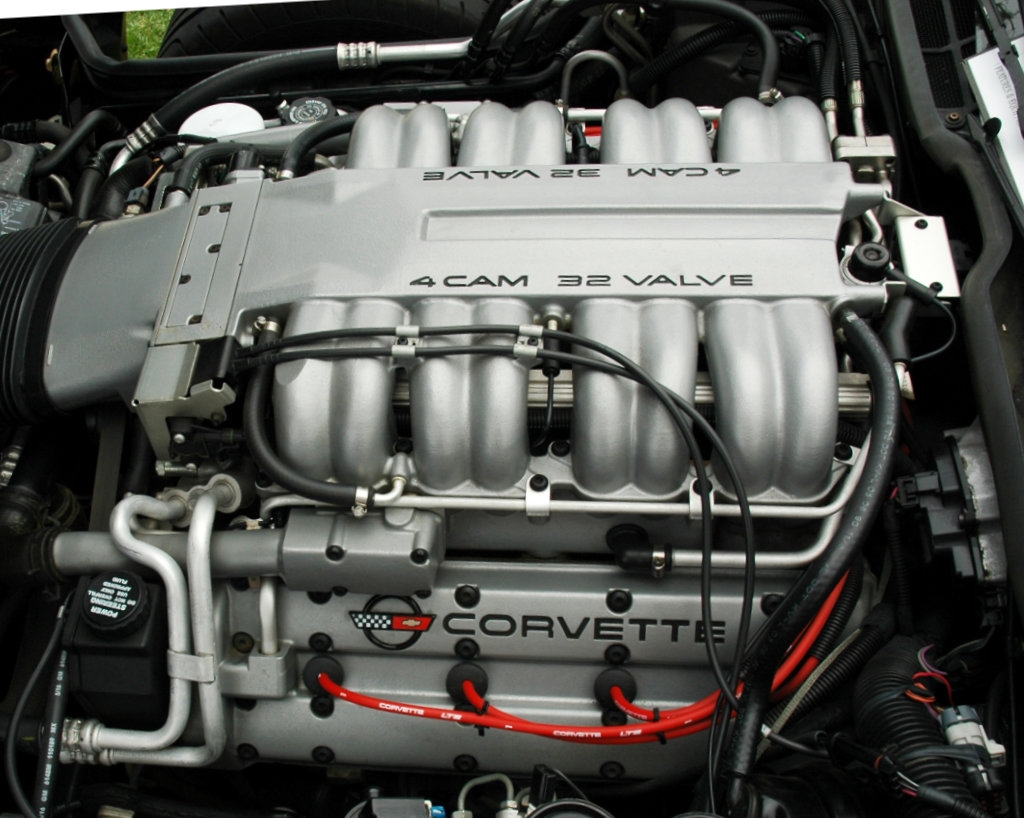 Modern Corvette engine bays do have their visual high points although you sometimes have to look for them. Above is the LT1 engine exhaust manifold and fuel injectors for the C7 Corvette. 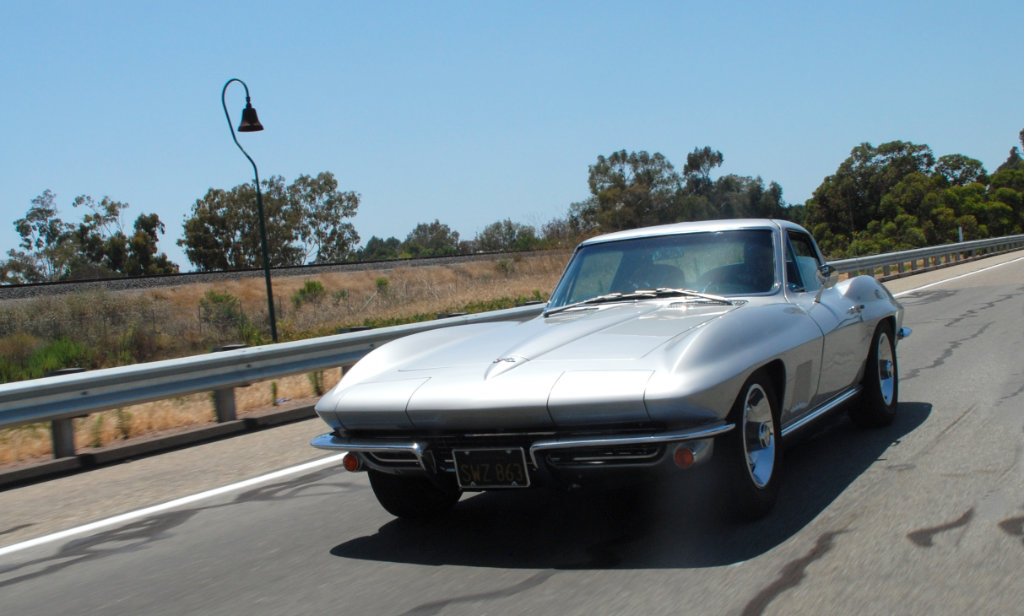 One way to up your Corvette photo portfolio is to try some on the road photo sessions. You'll need at least a two lane road. The subject Corvette travels in the right lane at a constant speed. You'll be in the passenger seat of the photo car (convertibles work best) for the photography. The driver of the photo car will start with a rear view of the Corvette and slowly pass it while you do the shooting. In industry parlance, this is known as "hanging out". 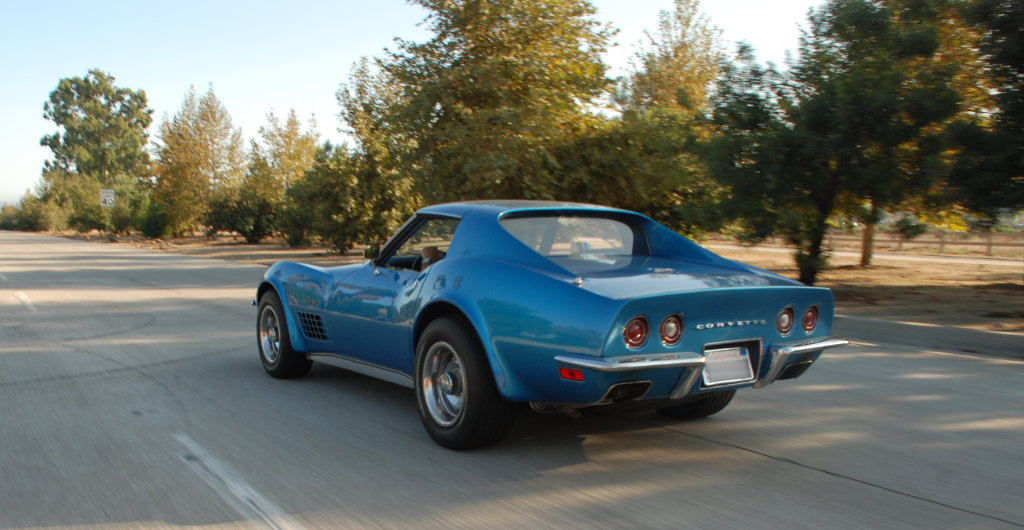 Try at least some of the shots with a longer shutter speed, say 1/60th of a second or more. You'll get some motion blur in the background which adds a visual speed factor to the photograph.


Photographs I Like Part Two
Dashboards, Reflections, Motion Blur, Golden Hour
Something Different, On The Road