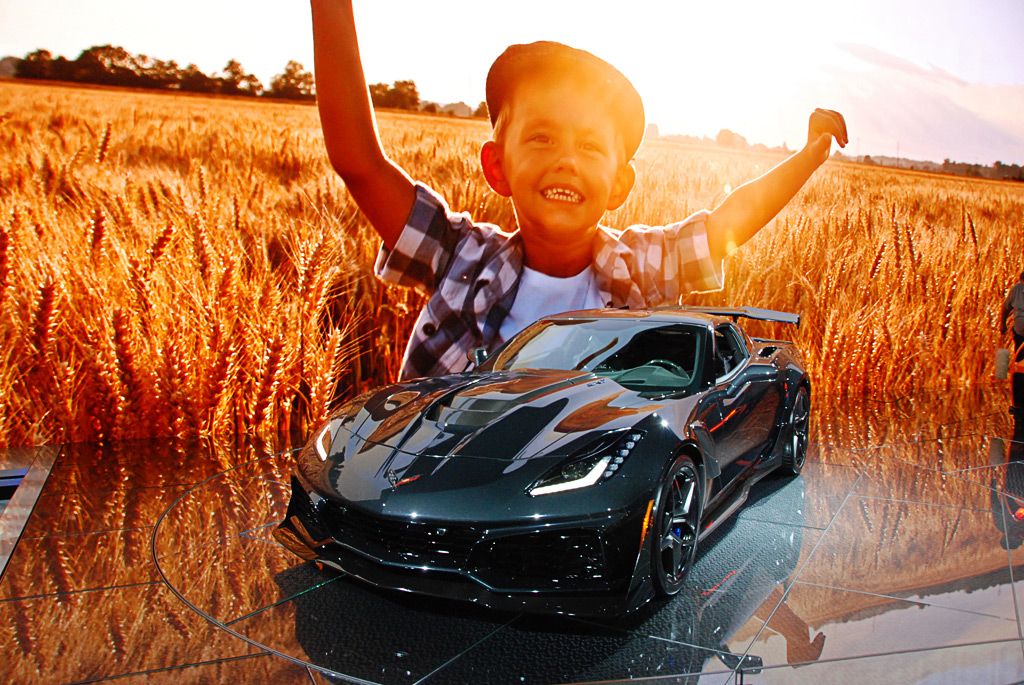 As with the Corvette Z06, the ZR1 intentions were purely racetrack oriented. While capable of boulevard cruising or even grocery getting, the first priority for the ZR1 is track day dominance. The price is $119,995.00.

GM commemorated the 65th anniversary of the Corvette with a special Corvette Carbon 65 Edition, offered on Grand Sport 3LT and Z06 3LZ models.

The horsepower gains came via 52% increased supercharger capacity over the LT4 Z06 installation; the 2019 LT5 supercharger displaces 2.65-liters. Also, when compared to the LT4 supercharger found in the Z06, the LT5 unit revs to 15,680 vs. 21,000 RPM; lower revs reduce heat problems and improve efficiency. The LT5 uses an 11 rib serpentine belt (as opposed to eight for the LT4) and it takes 110 horsepower just to turn the supercharger. Peak boost is 13.9 PSI. Sharp eyed observers have noted that a smaller pulley, which would increase boost and horsepower looks possible but GM is quick to point out the upgrade would void the warranty. The cylinder block, connecting rods, pistons and heads are the same as the Z06 but the crankshaft has been improved. The fuel system has significant upgrades with both (primary) direct and (supplemental) port injection. Eco mode, which is part of the Active Fuel Management via cylinder deactivation on LT1 engined Stingrays, is not included with the ZR1. 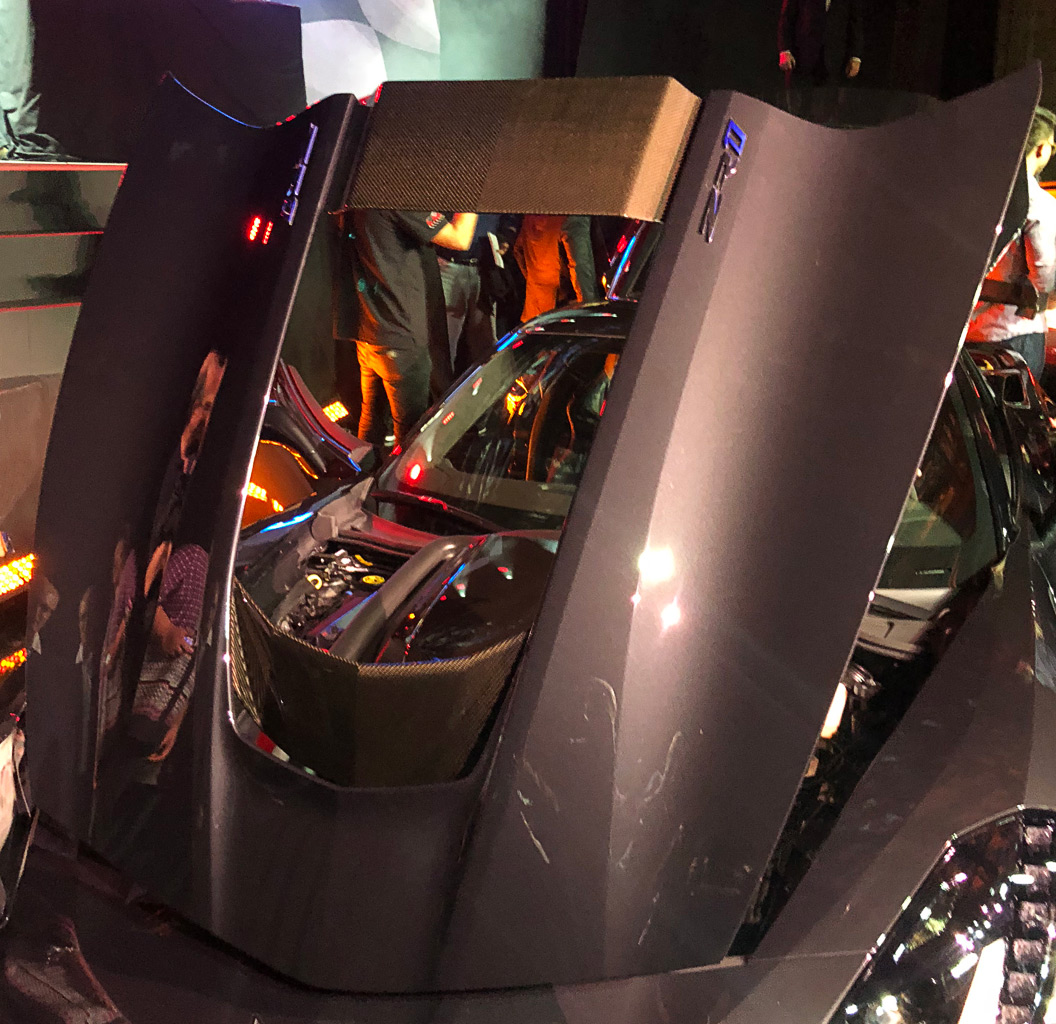 A very distinctive visual cue: the ZR1 hood is a "Shaker" design; a popular '60s trick where the carburetor (or in this case, blower) cover appeared through a hole in the hood (left). The cover shake could be seen by the driver. This was more of a necessity than a gimmick as the increased blower size (2.9 inches higher than the Z06 blower) forced a significantly taller hood (below).

Cooling had been a problem on C7 Z06 Corvettes that had seen rigorous racetrack use. GM was sensitive to the issue and went to great lengths to solve the problem in the ZR1. The solution was larger front air intakes (above) and 13 radiators / heat exchangers on automatic ZR1s.

The "High Wing", part of the ~$3,000 ZTK Performance Package, which includes a front splitter with carbon-fiber end caps, Michelin Pilot Sport Cup 2 summer-only tires, and specific chassis and Magnetic Ride Control tuning for greater cornering grip. Designer Tom Peters told us the aerodynamic performance was the same if the wing was just a simple flat piece but the visual was boring, hence the swoopy shape.

The standard flat wing, aka the "Low Wing".

Above left, right: ZTK Performance Package wing and standard wing. The ZTK wing generates an astounding 950 lbs. of force, so much that it was found necessary to attach it directly to the frame. Had it been simply mounted on the body surface, as most wings are, the downforce would have busted up the bodywork for sure. Note the aggressive end plates. 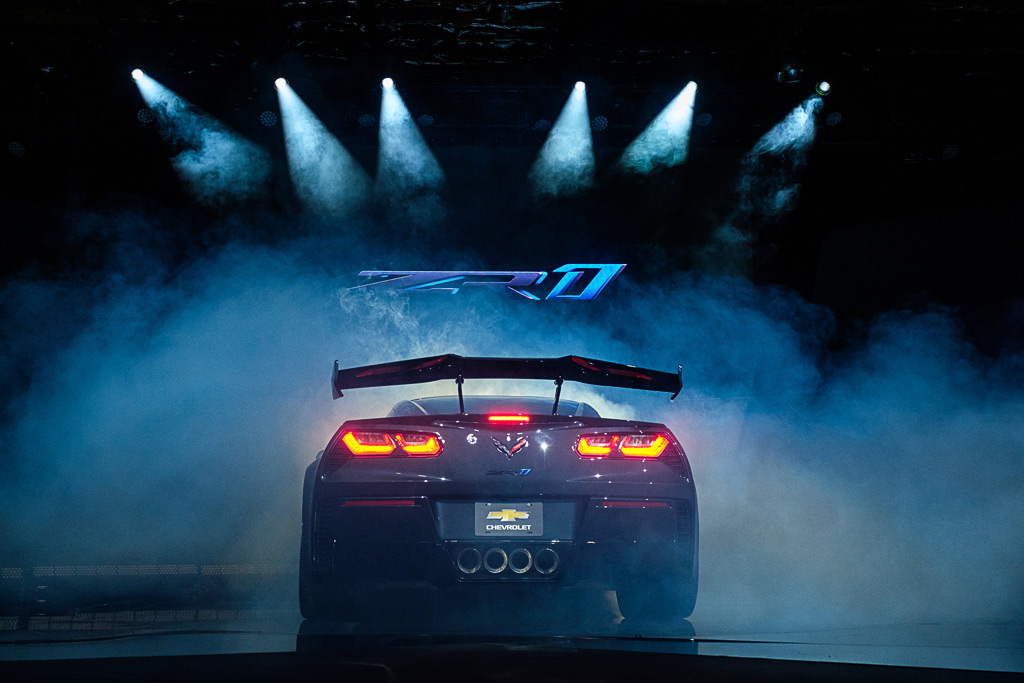 One might assume that the ZTK wing (right) is the way to go, but not necessarily. The 950 lbs. generated is great for improving cornering speeds but it adds drag, slowing down top speed and quarter mile acceleration runs. It's one of those "take your pick" dilemmas facing ZR1 buyers, with road racers preferring the ZTK wing. Top speed, which was achieved with the low wing, is a SAE certified 212.48 mph and the quarter mile time is quoted by GM as being in the high 10 second range. Using the high wing reduced the top speed by about 10 mph. The convertible ZR1, which as is typical with convertibles was at an aerodynamic disadvantage, has a 208 mph top speed. 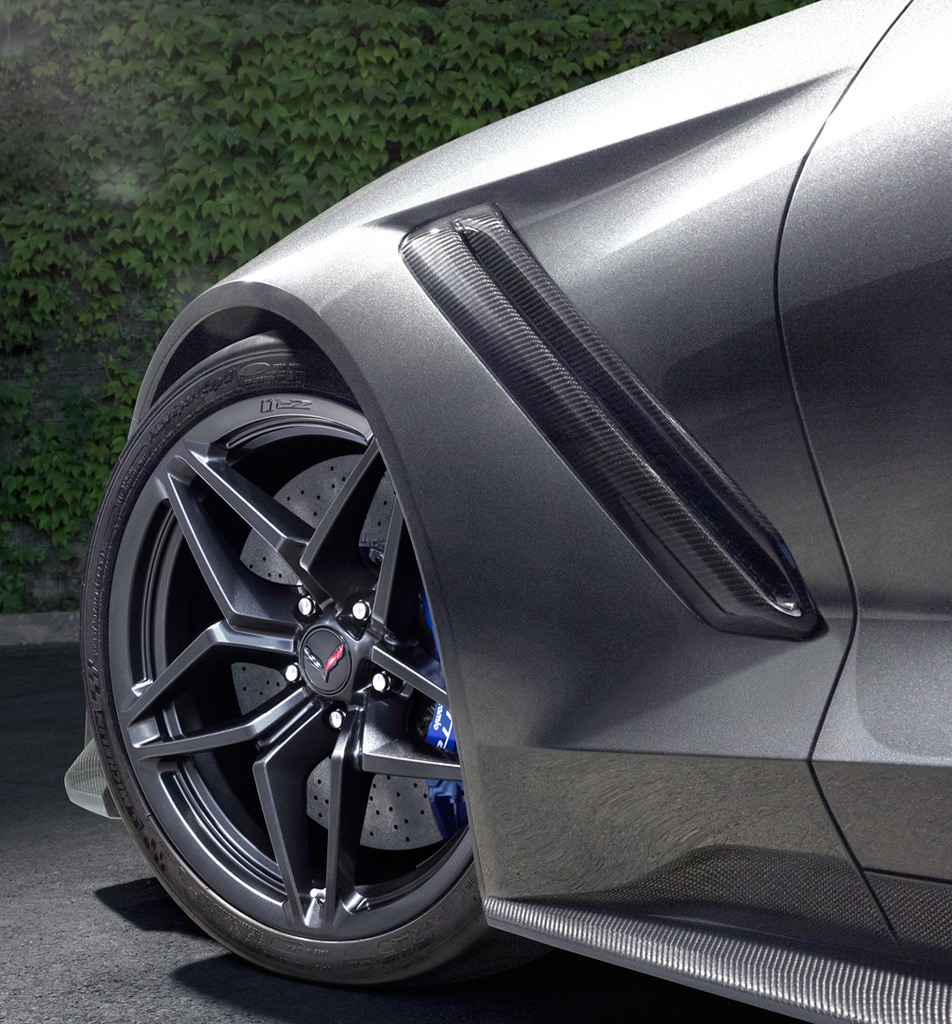 Above: The ZR1 front wheels gained ½ inch over the Z06 to 19 x 10.5 inches; the rear wheel remained the same at 20 inch x 12 inches. The bodywork forward of the A pillar is exclusive to the ZR1. 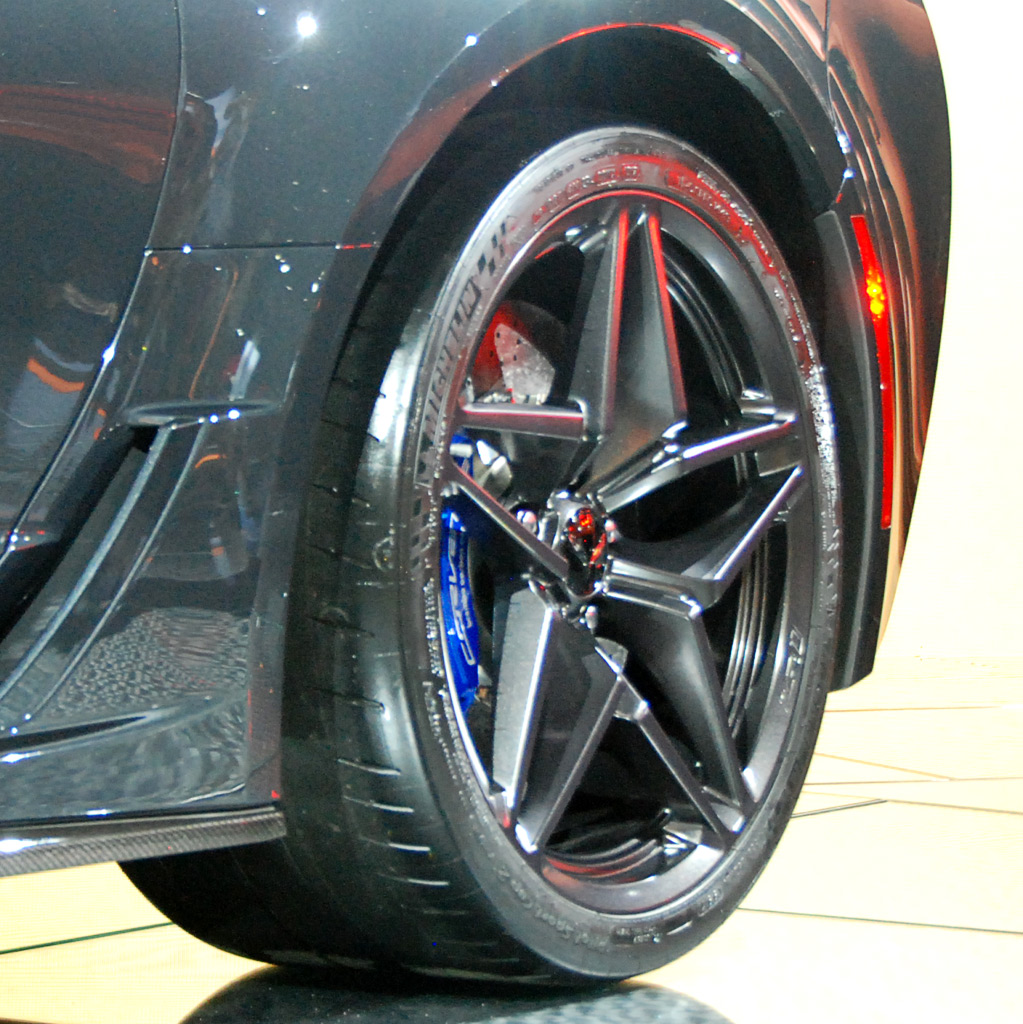