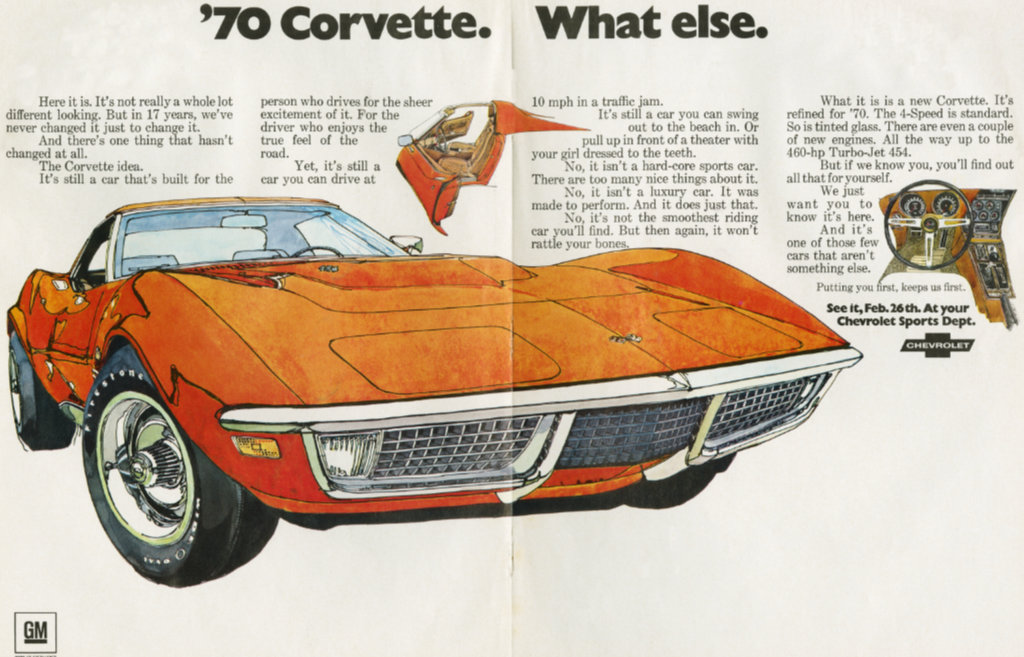 Here it is. It's not really a whole lot different looking. But in 17 years, we've never changed it just to change it.
And there's one thing that hasn't changed at all.
The Corvette idea.
It's still a car that's built for the person who drives for the sheer excitement of it. For the driver who enjoys true feel of the road.
Yet, it's still a car you can drive at 10 mph in a traffic jam.
It's still a car you can swing out to the beach in. Or pull up in front of a theater with your girl dressed to the teeth.
No, it isn't a hard-core sports car. There are too many things nice about it.
No, it isn't a luxury car. It was made to perform. And it does just that.
No, it's not the smoothest riding car you'll find. But then again, it won't rattle your bones.
What it is ais a new Corvette. It's refined for '70. The 4-speed is standard. So is tinted glass. There are even a couple of new engines. All the way up to the 460-hp Turbo-Jet 454.
But if we know you, you'll find out all that for yourself.
We just want you to know it's here.
And it's one of those few cars that aren't something else.
Putting you first, keeps us first.
See it, Feb. 26th. At your Chevrolet Sports Dept.

On August 29, 2017, NASA/Jet Propulsion Laboratory-Caltech published the below poster. it was inspired by the "'70 Corvette. What else." two page ad in Road and Track. If your a space exploration geek and a Corvette fan, the whimsical retro poster celebrating the Cassini spacecraft's final moments in space has special meaning.

The Cassini–Huygens space-research mission was active for nearly 20 years. It orbited Saturn for 13 years and deployed the Huygens probe, which landed on Saturn's largest moon, Titan. The mission was managed by NASA's Jet Propulsion Laboratory in the United States, where the orbiter was assembled. 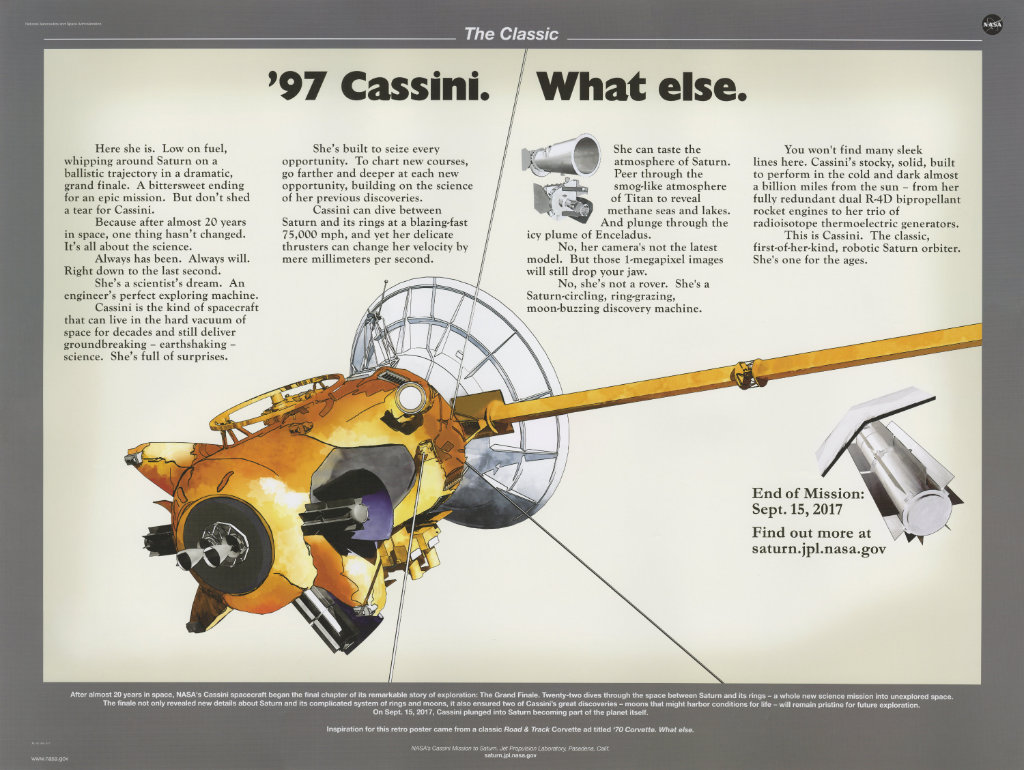 Here she is. Low on fuel, whipping around Saturn on a ballistic trajectory in a dramatic, grand finale. A bittersweet ending for an epic mission. But don't shed a tear for Cassini.
Because after almost 20 years in space, one thing hasn't changed. It's all about the science.
Always has been. Always will. Right down to the last second.
She's a scientist's dream. An engineer's perfect exploring machine.
Cassini is the kind of spacecraft that can live in the hard vacuum of space for decades and still deliver groundbreaking - earthshaking - science. She's full of surprises.
She's built to seize every opportunity. To chart new courses, go farther and deeper at each new opportunity, building on the science of her previous discoveries.
Cassini can dive between Saturn and its rings at a blazing»fast 75,000 mph, and yet her delicate thrusters can change her velocity by mere millimeters per second.
She can taste the atmosphere of Saturn. Peer through the smog-like atmosphere of Titan to reveal methane seas and lakes. And plunge through the icy plume of Enceladus.
No,her camera's not the latest model. But those 1-megapixel images will still drop your jaw. No, she's not a rover. She's a Saturn-circling, ring-grazing, moon-buzzing discovery machine.
You won't find many sleek lines here. Cassini's stocky, solid, built to perform in the cold and dark almost a billion miles from the sun - from her fully redundant dual R-4D bipropellant rocket engines to her trio of radioisotope thermoelectric generators. This is Cassini. The classic, first-of-her-kind, robotic Saturn orbiter. She's one for the ages.