The market has a definite opinion here as only those Corvettes that can pass the "Is it correct?" test get the high dollars. Correct means that what is on the car is what was on it when it left the factory.

The term can be controversial as it is sometimes not clear what is "correct". There is also the "period correct" concept which refers to equipment on the car that was not produced by the factory but which was often added by owners at the time the car was new. 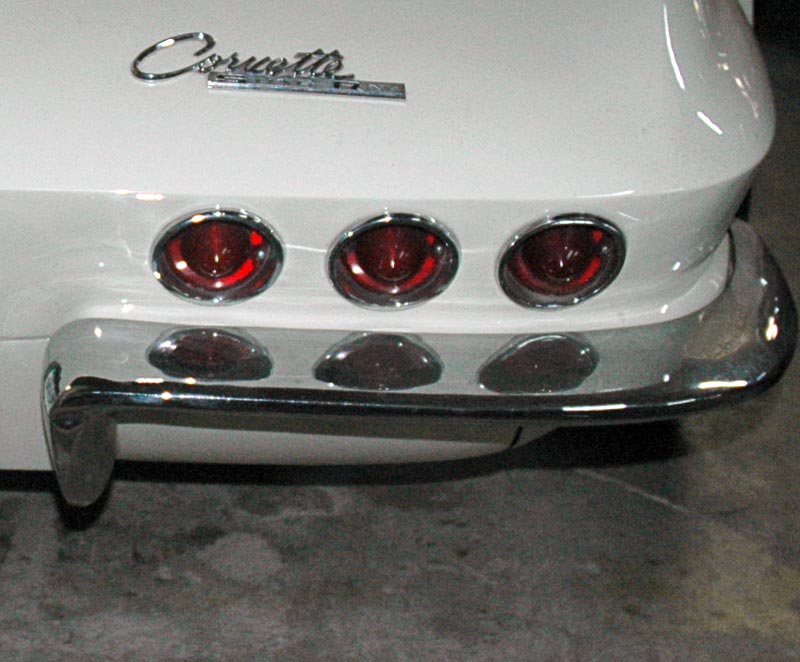 Right: An example of an "incorrect" Corvette. Extra tail lights were added to this mid-year Corvette; four (two on each side) was how they were all built at the factory. This car would likely sell for less than a similar unmodified example. Other examples of "incorrect" status: changing the color of the car, installing a leather interior if not part of the original equipment, etc.

There are areas where the "is it correct?" debate gets thorny. If something is changed on a car for the sake of improvement, is it still a negative? For example: the installation of an alternator and a 12 volt electrical system on a 1954 Corvette which was originally a six volt system equipped with a generator. All will agree that the 12 volt alternator system is technically superior. Owners can preserve the value of the car by performing only "bolt on" modifications. In the case of the electrical system update, all the original six volt parts and the generator are retained. When the car is put on the marketplace, the seller can offer to return it to the original system and also include the extra parts in the deal. The best of both worlds perhaps? Many early Corvettes had uneven panels with a fair amount of waviness especially in flat areas. That was the nature of fiberglass technology of the time. The question for the owner of a Corvette about to be painted is "Do the wavy panels stay or do they go?". Some may feel that the car looks better without the waves. But it would not to be correct.

Often the right Corvette can be some distance away from your location. Despite the distance though, you know you want it! Our friends from Corsia Logistics can help you ship it anywhere in the country, and even internationally. The preferred method for sports cars like the Corvette is shipping via enclosed carrier that protects against elements. For a customized quote please call 818.850.5258 or request a quote online at http://www.corsia.us/car-shipping-quotes. For more information on auto transport price formation please visit this guide.

Hopefully we have not been too negative in our coverage of a classic car purchase. This applies to your own search. When communicating with the seller, excessive pushiness or a demanding attitude can cause a seller to not want to deal with you. We may be used to beating on car salesmen like a rented mule, but that tactic can backfire when dealing with a private party. A seller who knows they have a good car may decide to ignore you if reasonable requests turn into big hassles. To put it another way, a seller trying to unload a car "with issues" might tolerate the mule beating in hopes of unloading their problem. Sellers are human beings too and respond as such. If the seller has a nice car, tell them! If they are doing a good job in presenting their car and in helping you with your search, thanking them is appropriate. Many long lasting friendships started with the sale of a classic Corvette. You also may need to contact the seller as a resource after the car's purchase, so keeping the lines of communication open is a good idea.

Which Corvette To Buy, Part One

Which Corvette To Buy, Part Two